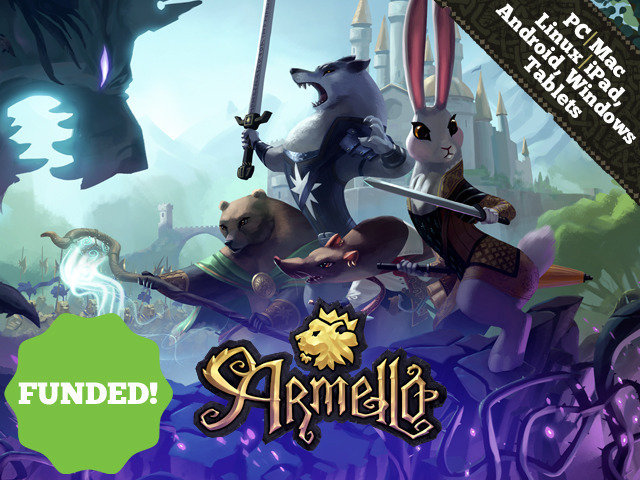 Is there a single-player mode? And how many players does multiplayer support?

Armello is a dynamic sandbox of adventures, you can enjoy it on your own against A.I. Heroes and of course with up to three other friends. Armello will support between 1-4 players. Stories are woven each game with different quests, battles, procedural maps and different events in-game all contributing to your saga in Armello. Last updated: Thu, Apr 10 2014 1:00 pm EDT

Is Armello free-to-play? Is there a subscription? Is it premium?

We started out that way over two years ago, but not anymore, we want you to have a complete and full experience with no gates or bars. No subscriptions - You buy the game, you get the game, play as much as you like :) Last updated: Thu, Apr 10 2014 1:00 pm EDT

Will Armello have IAPs (in-app purchases)…?

Wait, whereâs your Steam Greenlight info? How do I vote for you?

Iâve seen some basic mechanics on some cards, is this the case for all cards?

No, some cards are simple, some are more complicated and some simple cards become complex if theyâre played in conjunction with other cards. weâll soon be releasing more information, but rest assured that weâve been playing the prototype and once you start combining cards from different decks, it can really open up a world of options and strategies. Also, it’s early days, cards will likely change multiple times again before release. Last updated: Tue, Apr 8 2014 4:46 pm EDT

Are you guys really indie? You said you have a team of over 30.

Sure are! We’ve only just found a space in a shared game development hub. Most of us donât work on Armello for pay. In fact, we put our money into development costs and have not signed a single publisherâs contract. We might have a larger team but weâre totally slumming it! This is a passion project and weâre totally free to be as creative and original as our dreams allow. Working out of hours, for no pay, on your dream project for over almost three years? That sounds pretty indie. :) Last updated: Tue, Apr 8 2014 4:46 pm EDT

Game development costs a lot of money and weâre doing it on a shoestring budget, but hardware, licenses, and getting the right programmers and testing done simply incurs costs that we canât avoid. Oh and rent needs to be paid, and the accountants fees, oh… and tax. Etc, etc. Last updated: Thu, Apr 10 2014 1:00 pm EDT

The trailers look pretty expensive, couldnât you have finished the game with that money?

No, unfortunately. We were lucky enough to get some government funding from Film Victoria and Screen Australia (thanks guys!) but that money was allocated to us for marketing and transmedia purposes, not for game development. Last updated: Tue, Apr 8 2014 4:46 pm EDT

So until now all of your team including Lisa Gerrard are working for profit share and have not been paid?

Pretty much no pay. Some members have been paid small sums while they took time away from their paying day jobs to work on Armello, or when weâve just needed to contract out a certain skill or service, or when a member of the team’s going through hard times we’ll scrape together some cash from somewhere. :) Asides from that, yeah… everyone is in this for the sole reason that they believe in it. Oh also, side note; Accountants and lawyers donât work for free. Last updated: Tue, Apr 8 2014 4:46 pm EDT

Most of the money will go to full-time wages, some to rent, some to development costs. Team members will likely be Trent Kusters who will lead development, a couple of programming legends and amazing artists, plus a few short contracts to complete specialist tasks. Last updated: Tue, Apr 8 2014 4:46 pm EDT

Will there be an animated Armello movie or series? Has a TV network or movie studio approached you? Anything at all on the cards?

Will there be any more Armello publications (comics, novels, children’s books…) set in the Armello world?

We hope so! We definitely want to do them, the Novella stories are our first foray into sharing more of the wider Armello world. As the game gets closer to being complete, weâll start looking at more mediums that we wish to tell Armello’s stories with. Last updated: Tue, Apr 8 2014 4:46 pm EDT

Can you please give me an estimate on the possible release date?

We’ve put an estimate of March 2015, but we are working very hard to bring Armello to you much sooner than that. Fingers crossed! We do have a saying at League of Geeks though… “When it’s ready.” Last updated: Tue, Apr 8 2014 4:46 pm EDT

How much will Armello cost when or if it comes out?

Hasnât been locked in stone yet, weâll need to assess the current market prices when the game gets closer to shipping, but expect it to be at a premium price in comparison to games of a similar scope and quality. Last updated: Tue, Apr 8 2014 4:46 pm EDT

I am a developer/artist/musician/voice over actor, how can I work on Armello?

Reach out to us through email or Facebook, but away from the Kickstarter and say ‘Hi’! Our quality bar is pretty high, but weâre always looking for talented artists to collaborate with. :) Last updated: Tue, Apr 8 2014 4:46 pm EDT

Are you planning to make a Armello board game?

No, the paper prototype only functioned because it took one of us to run the game while the others played, and ideally it took two designers to GM a smooth game. In the digital format that’s all done in the background for you. But we’ll never say never. Last updated: Tue, Apr 8 2014 4:46 pm EDT

Youâre an Australian Kickstarter, why are you shipping from the US?

It’s simply cheaper to produce and ship our rewards from the US and we made the assumption that many of our backers would come from the US, so weâve tried to find the best all round solution. Last updated: Tue, Apr 8 2014 4:46 pm EDT

Is there a deck building system? Will we be able to buy card packs?

No. We do want to release more cards into the game, but in games of Armello all players draw cards from the same three decks of cards. There are no unfair advantages brought to matches in Armello. Last updated: Tue, Apr 8 2014 4:46 pm EDT

What are and how do Amulets and Signets work in the game?

Each Hero can be adorned with one Amulet and one Signet Ring before starting a game of Armello. Amulets and Signet Rings provide special perks to help you tailor your favourite hero to your play style, whether you want to make Thane even stronger in battle, or give him more stealth, or perhaps you just want to alleviate a weakness he has. The choice is up to you. Last updated: Tue, Apr 8 2014 4:46 pm EDT

Will more Heroes be made available in the future?

Yes, our plan is to release many more Great Clan Heroes. Meaning heroes belonging to the Wolf Clan, Rat Clan, Bear Clan and Rabbit Clan, and perhaps in the far future we will release more clans to the game, but for that we shall just need to wait and see. Last updated: Tue, Apr 8 2014 4:46 pm EDT

Is there 2D animation from the animators that did the trailers in the game?

A tiny bit, but we plan to integrate far more. As much as is possible. Weâre planning a stretch goal to help cover the costs of more animations for sequences in the game. Last updated: Tue, Apr 8 2014 4:46 pm EDT

Will I be able to play my friend from PC while Iâm on my iPad?

We donât know how to make that possible at this stage and canât promise it, but if we can work it out between now and releasing the game weâll make it happen. Cross platform multiplayer is something we’re very interested in. Last updated: Tue, Apr 8 2014 4:46 pm EDT

If I back Armello, will I get an iPad copy of the game?

Yes, all rewards in-game will be cross platform and attached to your user account so you will be able to move freely from platform to platform. Last updated: Tue, Apr 8 2014 4:51 pm EDT

Is the Bandit tier the only way to get the Bandit Clan Heroes? Or will they later be available in-game?

Being a Bandit backer or higher is the ONLY way to get access to the awesome Bandit Clan Heroes. When we say Backer Exclusive, we mean it. Consider it a thank you for being awesome! Last updated: Tue, Apr 8 2014 4:51 pm EDT

At the Hero reward tier, can I get a miniature of any Hero? Of a Bandit Hero or just Clan Heroes?

Yes youâll be able to choose any of the gameâs heroes to have made up as a collectible miniature. Youâll be sent a survey to complete after the Campaign, where you can choose which hero you would like made (this includes Bandit Clan Heroes). Also donât forget you can get extra miniatures made up by adding $50 for each additional hero. If you want all four Bandit Heroes, just pledge at the Hero tier and add $50 for each additional hero! Last updated: Tue, Apr 8 2014 4:51 pm EDT

When will the Backer Forums Open?

We’re building our forums now, we have a small forum which the development team is using and testing out, before we bring Backers in. Expect it some time after the Kickstarter campaign has closed - fingers crossed successfully! The forums should be one of the first things to go live after the campaign. Last updated: Thu, Apr 10 2014 1:00 pm EDT

BackerKit is a service that crowdfunded project creators use to keep track of hundreds to tens of thousands of backers—from shipping details, pledge levels, preferences and quantities, whether they have paid or had their card declined, special notes, and everything in between!

The BackerKit software and support team is independent from the campaign’s project team—BackerKit does not handle the actual reward shipping. For more information about the preparation or delivery status of your rewards, please check the project's updates page.

How does BackerKit work?

After the campaign ends, the project creator will send you an email with a unique link to your survey. You can check out a walkthrough of the process here.

I never received my invitation. How do I complete the survey?

The most common reasons for not receiving a survey email is that you may be checking an email inbox different from the email address you used to sign up with Kickstarter, Indiegogo or Tilt Pro account, or it may be caught in your spam filter.

Confirm that the email address you are searching matches the email address tied to your Kickstarter, Indiegogo, or Tilt Pro account. If that doesn’t work, then try checking your spam, junk or promotions folders. You can also search for "backerkit” in your inbox.

To resend the survey to yourself, visit the project page and input the email address associated with your Kickstarter, Indiegogo or Tilt Pro account.

How do I update my shipping address?

When will my order be shipped, charged or locked?

That is handled directly by the project creator. BackerKit functions independently of the project itself, so we do not have control of their physical shipping timeline. If you want to check on the project’s status, we recommend reading over the project's updates page.

I completed the survey, but haven't received my rewards yet. When will they arrive?

As BackerKit does not actually handle any rewards or shipping, the best way to stay updated on the shipping timeline would be to check out the project's updates page.